Studies indicating that women as leaders and negotiators have a pacifying effect on interstate conflict stand in contrast to the reality of women’s active involvement in civil conflict through armed rebel groups and insurgencies. Henshaw’s research seeks to provide insight into this apparent paradox by analyzing how and why women become involved in rebel groups, drawing on insights from feminist and international relations theories. The salience of these theories is investigated using data on women’s participation in over 70 armed rebel groups active since 1990, the largest data collection of its kind. 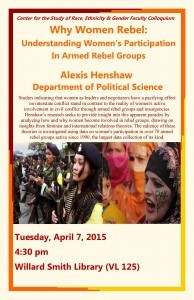