In the reign of the first Roman emperor, elite women became the objects of political and legal reforms that linked the wellbeing of Rome to their chastity and fertility.  At the same time, Roman imperialism was often depicted as the subjugation of women representing ethnic groups conquered by Rome’s armies.  In this talk Professor Baker will argue that Ovid, the Latin poet par excellence of this historical moment, uses the dominant rhetoric of gender hierarchy – including depictions of violence against women – to explore his own anxieties about the nature of empire and his place in it. 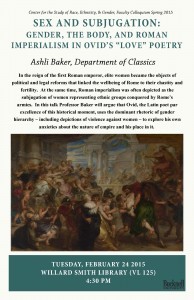