Vincent Stephens: “Rocking the Closet: Queer Musicians and Limits of the Closet” – April 3, 2013

Was the 1950s as oppressive for gay musicians as we think? Stephens argues that though Americans tend to perceive gay cultural history as a march forward toward acceptance, it is better understood as a tug-of-war. In this talk he discusses the struggles of gay male musicians from the post-WWII era to the present, examining the constant interplay of disclosure & reticence gay men experience in the U.S. 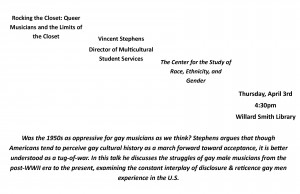