The Truth and Reconciliation Commission (TRC) of South Africa was engineered to redress human rights violations perpetrated under apartheid rule.   Yet, in many ways, the reconciliation process did not interrupt the patriarchal and racial orders that were established and maintained by the colonial and apartheid governments. This talk will examine the ways in which embodied race and gender identities have been reproduced in the post-apartheid era and effect the ways in which individual engage  with the project of national reconciliation. 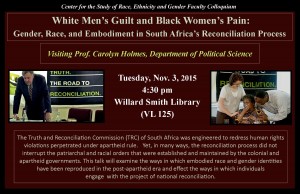