This presentation reviews recent contributions of disability studies to Classics and Classics to disability studies. Via a few test cases, Daly will argue that to date the two disciplines have to some degree misheard each other. The interaction between the fields is important to scholars of both fields, but the evidence for ancient conceptions of difference has often been conflated with the evidence for the influence of the reception of Classics on modern perceptions. Daly will also consider whether the concept of race in Classical Studies might prove a useful analog to considering matters of disability. 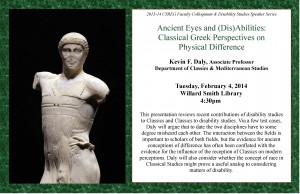